a little bit about us 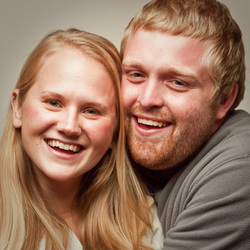 About a year after dedicating his life to Christ, John felt his heart burdened by the poor and orphaned. During  a month-long stay in Haiti, John knew he was called to cross-cultural ministry. He lives to serve Christ and decided to become an auto mechanic as a tent-making job. In May 2011 he graduated from Johnson County Community College with an AAS in Automotive Technology.

Abigail received her call to cross-cultural ministry while studying abroad in Ecuador. While there, she volunteered daily at an orphanage and fell in love with God's children. In May 2011 she graduated from Southern Nazarene University with a BA in Spanish-English Translation. She is a free-lance document translator between Spanish and English, and loves learning other languages as well!

The two were married in June 2010, lived in Haiti for a year while volunteering for the Global Orphan Project (www.goproject.org), and moved back to Kansas City in April 2012 to prepare for the arrival of the newest Carr. Hosea Thomas Carr arrived in July 2012 :-)